A Quick Recap of Four Days of Awesomeness With Ad Exchange Mediastinct™ at #AWNewYork and SMX East 2016! 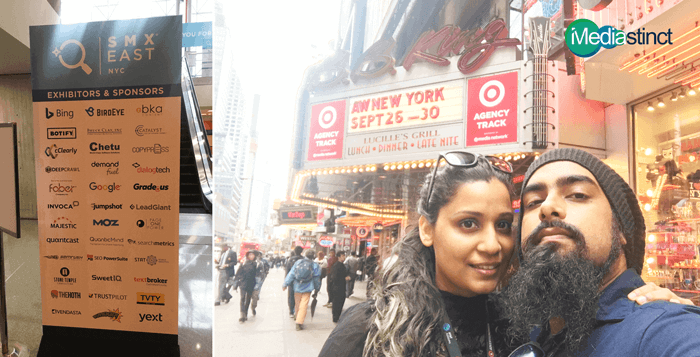 Attending ad conferences has always been a great learning experience for us, with scores of talks from industry leaders, networking with talented people and simply basking in the contagious energetic vibe- Advertising Week New York and SMX East truly lived up to their reputation!

This year Advertising Week New York was special as it celebrate its 13th Anniversary and featured some remarkable keynote sessions by inspirational industry leaders, including Mark Cuban and Daymond John from Shark Tank, Sheryl Sandberg, COO Facebook, Dr. Oz and celebrities like Drew Barrymore, Founder of Flower Beauty and the Bella sisters, Co-Founders of BirdieBee.

So, What Were the Biggest Trends at Advertising Week New York 2016?

1. Programmatic buying, advertising and marketing were irrefutably ‘the buzz words’ at Advertising Week.

With over 15 sessions on Programmatic evolution, audience targeting and discussion on the future of data-driven consumer engagement – its clear that Programmatic is the way forward in the digital advertising industry.

With over 24 sessions dedicated to discussing sexism in the workplace, portrayal of women in ads – #Femvertising and redefining feminism in the pop culture. #AWNewYork was definitely all about women empowerment in the workplace and addressing the gender stereotypes we have created over the years. It was the a great way for brands and companies to take note of the changing roles in the 21st century.

3. Role of Technology in the digital advertising space.

Considering that the top trending topics attached to the #AWNewYork hashtag included #augmentedreality, #virtualreality and #software, its no surprise that technology and future of digital advertising was the center of discussion! With industry leaders stressing on data driven campaigns and merging technology with marketing – innovative technologies have become the new industry reality.

The need for racial, gender and cultural diversity in the industry was undoubtedly the most relevant issue addressed through out the week.  With sessions like ‘The Race to Re-Unite’, ‘The Revolution Will Be Feminized’ and ‘Breaking the Mold’ – its clear that we’re becoming an industry that has finally started realizing that innovation doesn’t come from a group of homogenous people. It needs inclusion of different ethnicities and genders.

5. An obvious focus on Millennials.

With over 7 sessions dedicated to understanding and targeting millennials, its clear that they play a big role, and we need to start paying attention! The millennial audiences have the potential to make or break your campaign. To win over this powerful group, there needs to be a focus on creating creative and authentic content along with experimentation of new platforms of marketing.

Moving on, here are the highlights from all the sessions we attended at #AWNewYork;

This session with Dr. Mehmet Oz and Martha Stewart, CEO of Martha Stewart Living, was an interesting conversation between the two, with Dr. Oz sharing insights about his recent survey on women’s health in America, and it’s implications for advertisers. Dyllan McGee, Founder and Executive Producer of AOL’s MAKERS, AOL was also a part of the panel.

Speaking about his businesses – the Dr. Oz Show and The Good Life Magazine, Dr. Oz shared a few data collection strategies that go into accessing people. Talking about the efforts advertisers need to make while dealing with the health care sector, he emphasized on the need for campaigns that focus on integrating humor in dealing with serious health issues.

An important takeaway from Dr. Oz’s session for all advertisers is the importance of communicating facts in a precise and thought-provoking manner, rather than dumping data on your audience and preaching to them. That’s the difference between being Dr. Oz and just any other medical practitioner preaching a healthy lifestyle to you!

Here’s a glimpse of Dr. Oz on stage, at Advertising Week New York 2016

2. From Divas to Superstars

This session with Brie and Nikki Bella focused on gender in-equality in a male dominated sports world. The Bella Twins spoke about how they disrupted the male dominated WWE Circuit and went on to usher in women into this sport, making it hugely successful! The twins also spoke about the upcoming launch of their brand – Birdiebee and their new show – Total Bellas on E!

While the reality show explores the daily lives of the Bella Twins, Birdiebee is a pay it forward brand that represents feminine health and women empowerment.

The second day for us, was all about mobile. The amazing sessions by Sheryl Sandberg, COO Facebook, Drew Barrymore, Actress & Founder of Flower Beauty and Harry Kargman, CEO of Kargo, on mobile advertising and targeting were particularly insightful.

While Sheryl spoke about leveraging video ads for targeting users on mobile, Kargman provided deep insights into how great creatives are the key to capturing the attention of fast-scrolling consumers on mobile.

By far the first day was the most exciting for us. Why? Well, it was the first day and Branding Mogul Daymond John clicked a selfie with us 😛

Read on for a complete picture of what went down at Advertising Week on the first day! 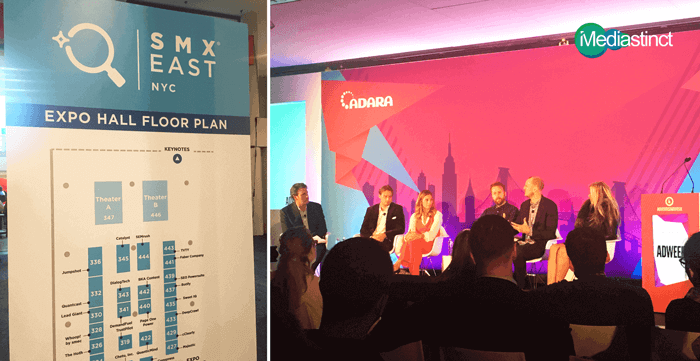 SMX East New York 2016 was all about making content marketing better with latest SEO and SEM practices. It also focussed on the importance of paid content in delivering the message of a brand to a wider audience, and how to get that right.

While SMX East Day 1 was all about Google Feature Updates and campaign optimization and tag Management. On Day 2 we did a deep dive into best SEM practices, SEM for brands and exploring multi-channel consumer targeting. The last day of SMX East 2016 revolved around sessions on Mobile PPC, re-targeting & re-marketing and monitoring conversion rates & metrics.

1.  Consumer behavior is shifting and evolving at an unprecedented rate, in ways that we cannot predict.

Consumer behavior is no longer limited to desktop, mobile, tablet or offline, only. With new video, ‘near me’ and voice command experiences that are still evolving, consumer behavior too has evolved and shifted as a response to this big web of experiences open to them. Now they are relying on a series of of interactions and touch points (micro-moments) to form an opinion about a brand.

2. When it comes to Search Engine Marketing (SEM), constant tweaking of your message is a must!

Your SEM strategy must incorporate new and upcoming ad changes. The first advantage goes to the advertiser who can absorb publisher changes, the quickest.

Google Paid Ads is always changing. While right rail ads have already been replaced with image-based product listing ads (PLAs), Standard text ads (STAs) are also set to be replaced with Expanded Text Ads (ETAs) in January 2017. The one who adapts fastest, wins the audience!

3. Smart SEM strategies drive local conversions by optimizing for “near me” searches

With Google having observed a stark doubling of ‘near me’ searches since 2015, its a must that your SEM strategy includes a geo-targeting component.

4. Use Social Media strategies to expand your SEM strategies

While many of us still consider social media and independent operation from SEM, many speakers highlighted the successes they have had with using social media strategies to fuel their SEM strategy. They pointed out that keywords that work well on social media may work well in paid search too. Judicious use of paid social targeting can act as a powerful tool to accelerate engagement after a brand has built significant trust with a prospect.

Missed us at Advertising Week and SMX East 2016? No worries, Catch us at ad:tech New York this November!

We are looking forward to networking with like minded executives as we launch two of our esteemed products- dotWriter.com and Engagemeant.com. So why don’t you leave your contact details below or simply reach out to us and set up a quick meeting?

Looking forward to see you there!